What are the top 10 Gunporn Memes? For the guy that has everything. Gandalf taking it to a whole new level! I got nothing here…… 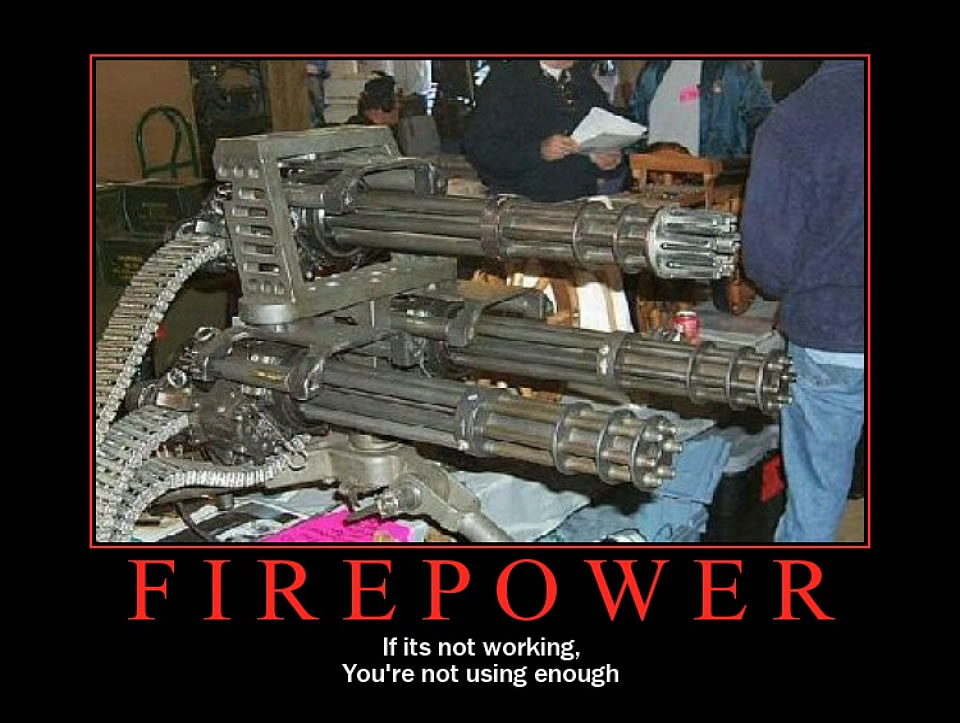 Have a gunporn meme you want to share. Let us know or add to the commentary below and we will add it for you.

Vision-Strike-Wear.com for years has been designing shirts for the military and gun lovers alike. We like you share in the philosophy of the right to bear arms and it is our birthright. Remain soverign and hold onto your rights and never let them go!

The Bone Heads did it again!

US Congress Officially Changes America’s Name.  Just what exactly is Congress doing again? Did anyone catch this in the New York Times, Washington Post or La Times? Hell no! We missed this highly eventful yet secretive push by Congress to change America’s name. In a dark, recessed cove in the hallways of American politics the government reached a unanimous decision to change America’s name!

Wanna know why you didn’t catch it? Cause you weren’t even born yet!

So while we are on the subject of changing names and declaring our sovereignty away from Great Britain let’s remember we are free, we are sovereign and no outside dictator, king, parliament, or authority shall take our freedoms away again and whether we prefer to call ourselves United States citizens or Americans we are still born free till the day we die!

So what is all this hullabaloo?

The term “United States” was adopted by the second Continental Congress to be used instead of the “United Colonies.” Ah. Ok. Now I get it.

So what other decisions over the years has baffled the American public? Congress and state legislators have been cooking up laws to this day are amazing if not borderline crazy. I would diagnose most of them as recovering from PTSD but I wouldn’t rank them as high or even close to the level of integrity our men and women in uniform have. So lets see what these carpetbaggers have concocted in our states over the years! One s

“When did we decide that we wanted a law that could make unlocking your smartphone a criminal offense? The answer is that we never really decided.”

Now Let’s Look At More of the Craziest Laws beset upon the American public across our great land. Here a few good ones!

It is illegal for a husband to beat his wife with a stick larger in diameter than his thumb.

Persons may not live in a trailer as it is being hauled across the city.

It is illegal to string a wire across any road.

No one may tie their pet dog to the roof of a car.

It is illegal for anyone over the age of 18 to have less than one missing tooth visible when smiling.

No one may “suddenly start or stop their car at a McDonald’s.

It is illegal to drive more than two thousand sheep down Hollywood Boulevard at one time.

No one may bring a pig with them to a theater.

Citizens may not be caught downtown without at least 10 dollars on their person.

It is illegal to eat cottage cheese on Sunday after 6:00 P.M.

Chickens are considered a ‘protected species’.

The flooring of adult bookstores and video stores must be nonabsorbant and smooth textured.

Basketball hoops may not be installed on a driveway.

It is against the law to use a slingshot unless you are a law enforcement officer.

There is a $1,000 dollar fine for beating rats with baseball bats.

It is illegal to bite a landlord under any circumstances.

Alligators may not be tied to fire hydrants.

In Oregon, a dead person cannot be required to serve on a jury.

Unmarried people are prohibited from having sex.

The list can go on and on and this is only the tip of the ice berg. In session alone Congress spent days deliberating on the condition that the United States call yogurt its official snack. American taxpayers flipped the bill paying for our elected leaders time as they discussed this in Congress.

So what do we know?

The 1st Amendment (A Great Law) is still the law of the land.

The 2nd Amendments (A Great Law) is still the law of the land no matter how screwed up Congress is trying to take away our God given rights.

This helps us to identify who we are as a people, that we are sovereign, free and we will not allow anyone to take this away.

I’m going to go ahead and agree with blogger “Good Boy” on this one and that I also have never understood bayonets for revolvers and pistols. It’s not the early 1900s anyone and there are few times you’re going to be defending your home with trench warfare. However, when you are observing your 2nd Amendment Right to Bear Arms, this definitely has some real intimidation component to it.

[Tweet “Sunday #GunPorn from #VSW. #pistol #bayonet on a #revolver.”]

Cool or impractical? You decide!

Open Carry in Texas is Battleground for 2nd Amendment

Open Cary in Texas has been the movement of law abiding citizens that have exercised their right to carry a weapon in the open in a variety of restaurants and locations found throughout the State of Texas. The gun debate, the battle over the 2nd Amendment and concerns raised about the threat of the US government taking away or increasing restrictions over gun ownership is clearly on the rise.

Jon Stewart and The Daily Show has recently commented ~ “First, pro-gun activists tried bringing their firearms into a Chili’s and Sonic and were promptly turned away. Even the National Rifle Association – “”the open-carry Death Star itself,”” as Stewart called it – thought maybe bringing loaded guns in to a Chili’s wasn’t the best idea, saying in a statement that it “showed a lack of consideration and manners.”

Following the NRA statement the Open Carry Texas movement threatened to remove its support of the National Rifle Association whereby the NRA reversed its earlier position calling it a “mistake”.

Stewart further commented ““Wow. Everyone’s scared of gun nuts, even other gun nuts,” Stewart quipped.” But the problem is not the labeling of one group or another as much as it is a fundamental Bill Of Rights 2nd Amendment right of all Americans. However Stewart did comment that we have arrived at a crossroads where those who operate under the OCT (Open Carry Texas) are running into the Stand Your Ground Community who may feel threatened by the show of weapons in public and these two groups may discover that each has an equal claim to the right of feeling safe and security but may produce the dilemma of safety verses safety and on what level this constitutes. Who is right and what attitude will win the day remains to be seen.

John Stewart and The Daily Show on Open Carry Texas!

The Second Amendment was adopted on December 15, 1791, as part of the first ten amendments comprising the Bill of Rights.

A well regulated Militia, being necessary to the security of a free State, the right of the people to keep and bear Arms, shall not be infringed.

Vision-Strike-Wear.Com has supported the US military, those wearing the uniform of the US military today and those who have served with honor in the past, the oath keepers, the first responders, public servants, Sheriffs that understand the true meaning of the 2nd Amendment and their oath of office as well as the citizens of the United States. We are all Americans and we have been been given a great opportunity by the founding fathers of our country whose desire it has always been to have the right to life, liberty and the pursuit of happiness.

Our dedication to the people of this great country is to express freely designs we feel will create a positive awareness of the subject of the 2nd Amendment and its importance as a fundamental part of our country’s history. The 2nd Amendment shirts below were created by those who appreciate our rights as Americans, the education and safe use of firearms and our inherited rights to protect and defend ourselves when needed.

Keep Gun And Carry On!

This design as quoted at VSW ~

Keep Gun And Carry On Shirt Made In America! These gun rights and 2nd Amendment shirts display a singular message: We have the Right to Bear Arms! This is a constitutional right. When governments seek to remove the guns from law abiding citizens then tyranny is the result. We fought England in 1775 and 1812 because American’s had rights and would not succumb to a non-representing monarchy and the people of the United States will not have their rights taken away when they have the power removed from their ability to defend themselves from enemies foreign and domestic.

The blood of America is Freedom and the military, the soldier, the Sheriff whose oath has been taken preserves the peace but prevents also the governments desire to replace freedom with unchecked rule. The people of the US will not have their right to bear arms taken from them.

So when when you express your opinion about gun rights remember to Keep Gun and Carry On!

America is rich with history and as the following designs will attest each has within it its own statement, iconic references to our forefathers and their desire to not participate as a British colony but exist as its own sovereign country. There would be no crown in America. This sovereign design represents this attitude.

From 1775 to the present day there have been patriots. Men  and women with the roar of defiance in their hearts and the willingness not to accept for the sake of what someone told you. Things were looked at, they were analyzed, and they were often criticized and when agreement was not reached: Revolution!

When the citizens of this country are left to peacefully go about their days, working, raising families, experiencing the pursuit of the American dream then calm and positive things are often the result. We were promised with the opportunity to pursue life, liberty and happiness and for those who threaten this there is life’s little equalizer: the 45 acp.

Life, Liberty and the Pursuit Of All Who Threaten It!

In every major American city and town are the men and women who love to work hard and play hard! They enjoy their weekends, the occasional football game, baseball game or even NASCAR race. Their weekends are filled with friends, family and guns! They shoot at pigeons, targets, deer, elk, or even at each other on occasion when the airsoft challenge is thrown down and teams line up across the battlefield and engage each other in the fields of paint! We salute you and your gun club and the getting together of good friends in your M’Erican Social Gun Club!

WWW.VISION-STRIKE WEAR.COM FIND US ON FACEBOOK WEAR THE MILITARY GETS COVER!