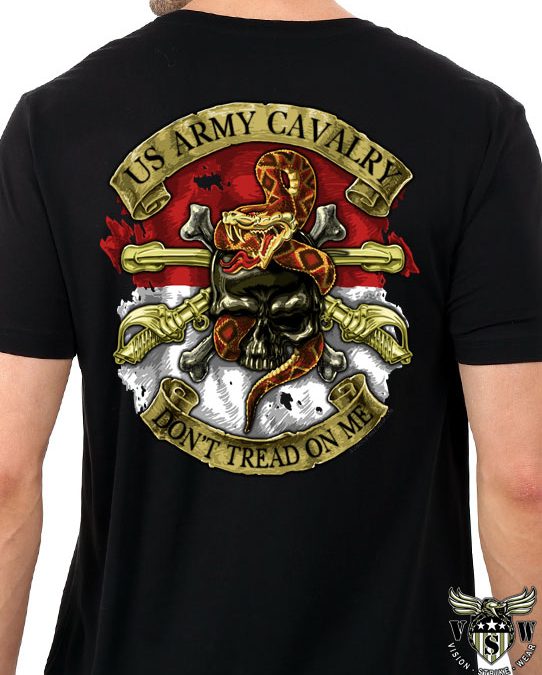 Honoring the Warriors of Desert Storm With Incredible Military Designs

At Vision-Strike-Wear.Com all veterans are honored such as those of Desert Storm Honoring the Warriors of Desert Storm With Incredible Military Designs is what the team at Vision-Strike-Wear.Com is all about. The military units that participated in Operation Desert Storm can experience their units vibrantly displayed on shirts which pay respect to the warriors that served in the sand box during the days when names like Sadaam Hussein, Baghdad, Kuwait were on the tips of American tongues. These are the units and aircraft that participated in what our enemy called the “Mother Of All Battles”.

The cutting edge military designs for shirts and apparel are often found at Vision-Strike-Wear.Com. For over 9 years they have been designing for US Army Soldiers, their commands and their units reaching across the globe from Fort Polk to Seoul, South Korea. Their military art is often designed for a variety of apparel types from hoodies to long and short sleeve shirts. Customers have the option of also selecting Made In America apparel options. At Vision-Strike-Wear.Com we feel it is important that our men and women in the United States military and US Veterans wear an American Made product.

Below you will discover many of the most popular US Army shirt designs created in 2017 with many more on the way.

The 24th Infantry Hawaiian Division created at the request of the units association. 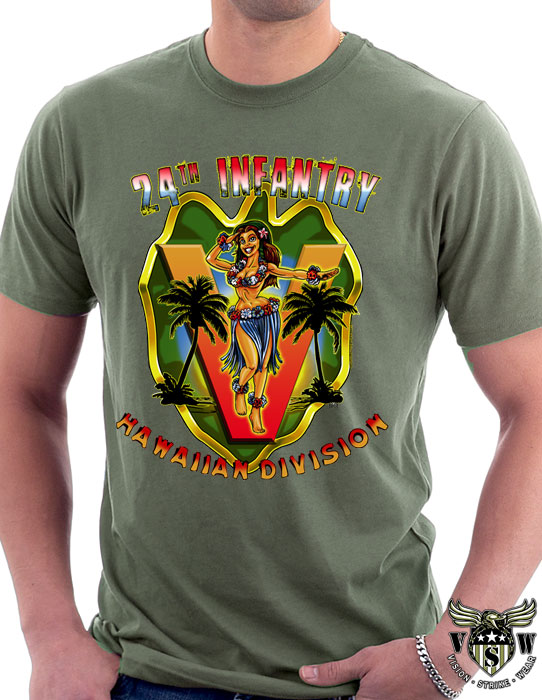 The Big Red 1. A number of the US Army Soldiers of the 1st Infantry Division asked for a cutting edge designs (literally) and we were happy to oblige their request with this 1st ID design and 75th Ranger Tab, knuckle breaker knife, boonie cap, skull, crossed M-4s with 203 and the blue colored infantry shield. 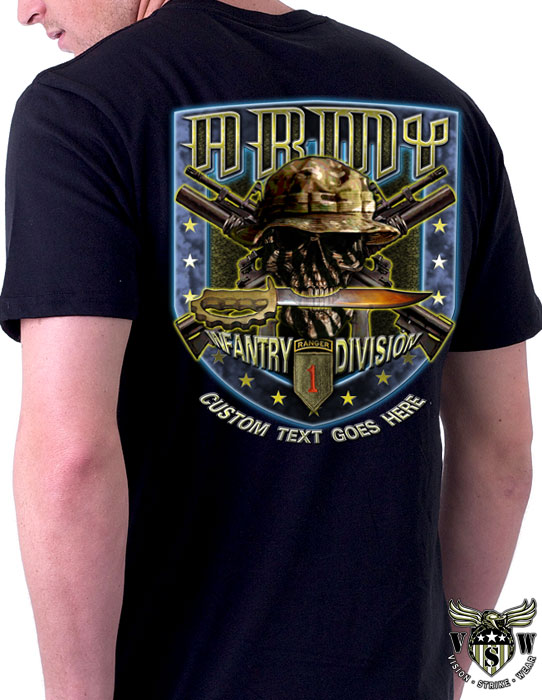 The First Team. The 1st Cavalry Division also requested this design out of Fort Hood and Vision-Strike-Wear.com went into design mode immediately. Earn Your Spurs! 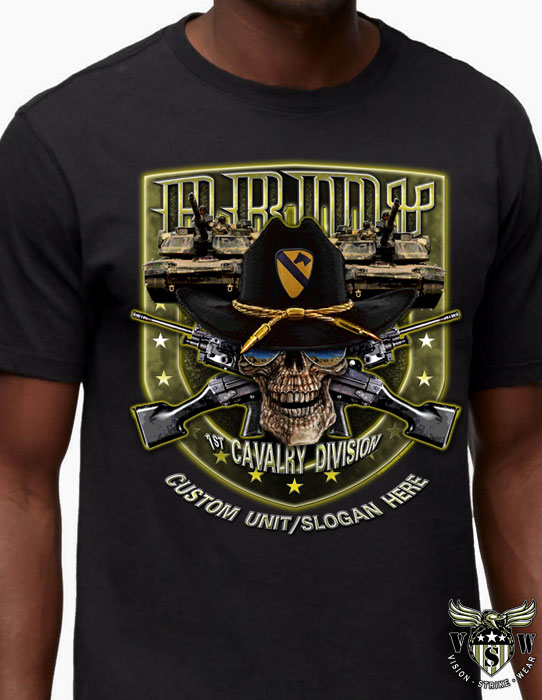 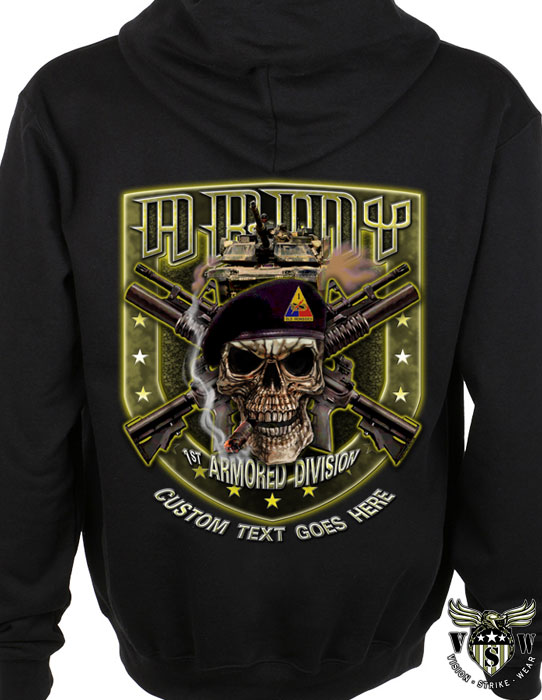 A military hoodie designed and created for the Veterans of Operation Desert Storm. 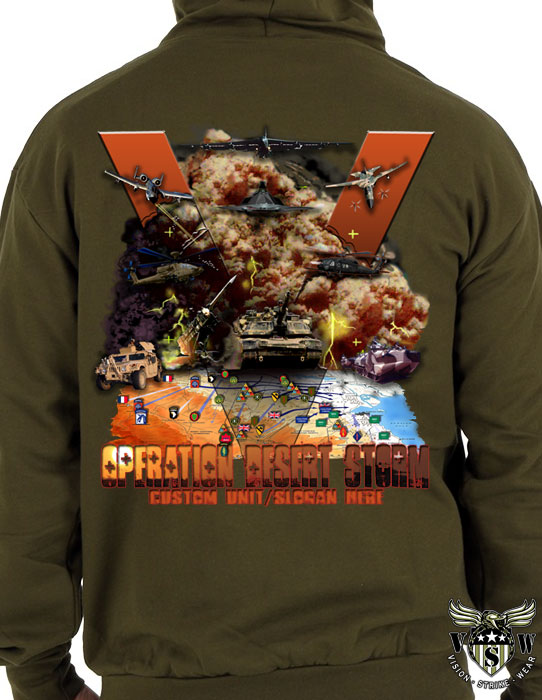 Up Armored. At the request of a few soldiers the request for an Up armored HUMVEE was developed so that the Soldiers in both Iraq and Afghanistan during OIF and OEF could have a military design they wanted and received. 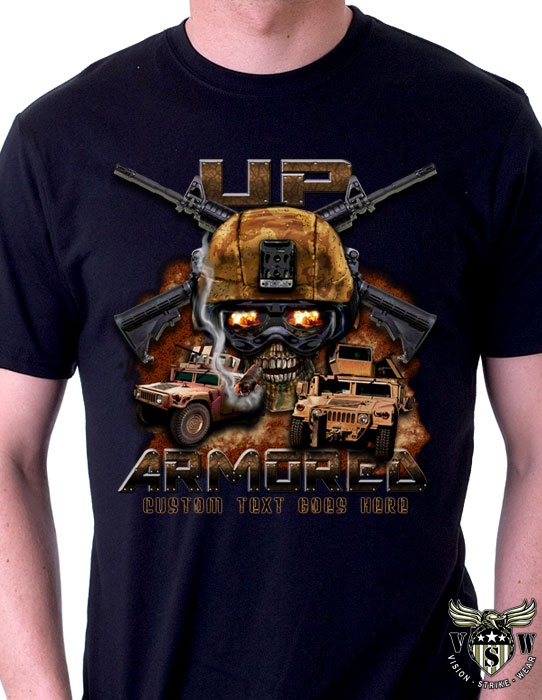 The US Army Cavalry military shirt with Copperhead Snake, crossed cavalry sabres, Cavalry guidon in red and white and the American Motto “Don;t Tread On Me’ has become one of the most popular US Army shirt designs we have created. 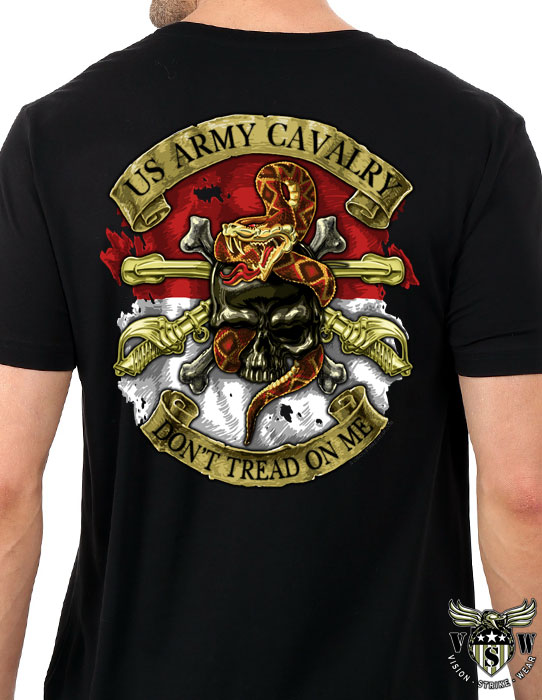 Patrick Henry said it all and this Give Me Liberty, Or Give Me Death design was created and fashioned on this military hoodie and then offered in shirts and more for both active duty US Army and prior service. The crossed hatchets, fierce skull and Army Star complete this highly articulated design that has been extremely popular among the troops! 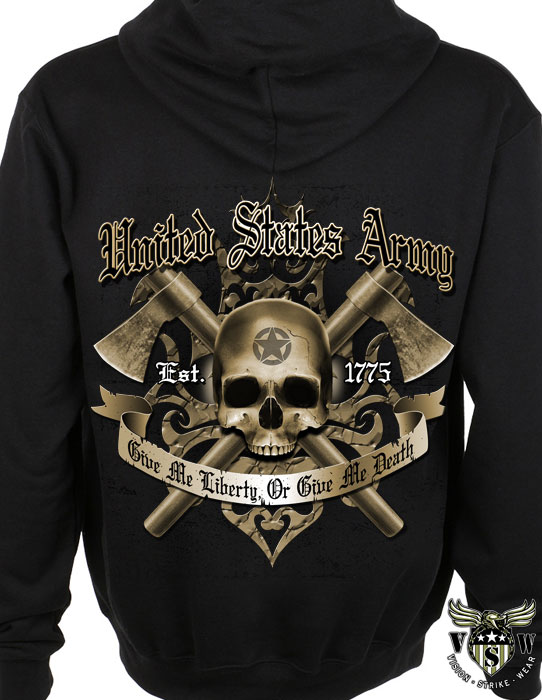 The US Air Force came ready, loaded and screamed across the Arabian skies bringing modern air supremacy and air combat to Operation Desert Storm. The designs below feature the US Air Force aircraft that raced for Baghdad in their fight against Iraq. 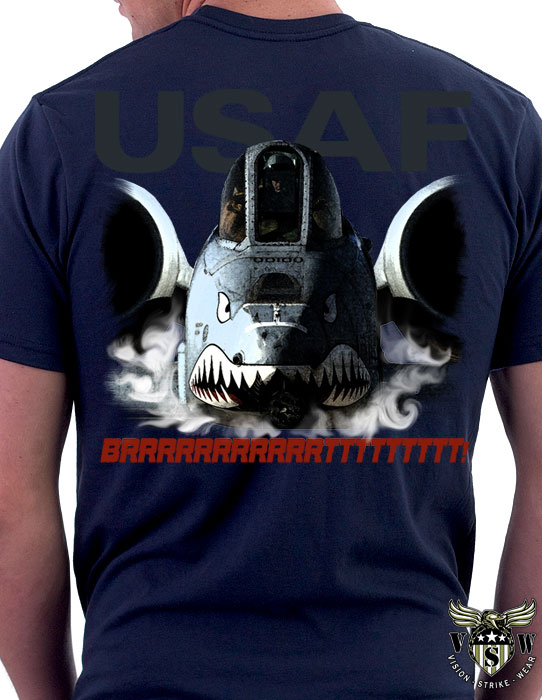 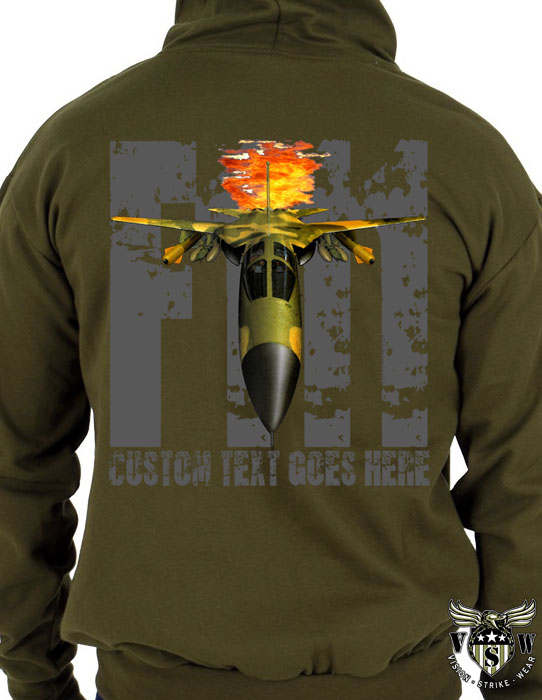 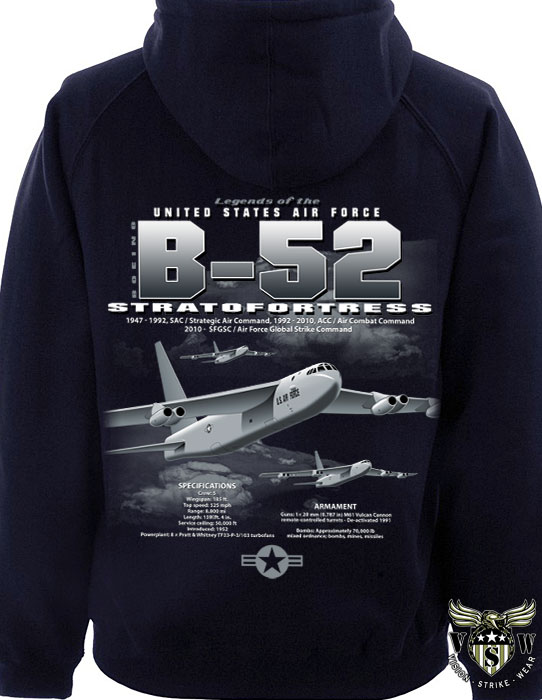 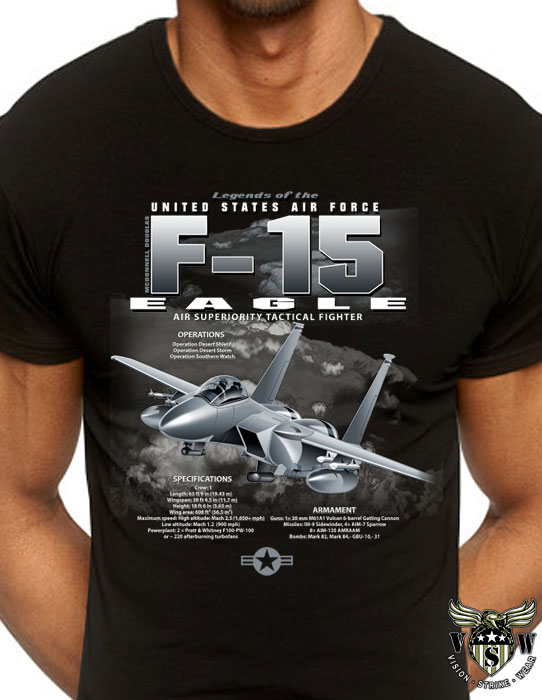 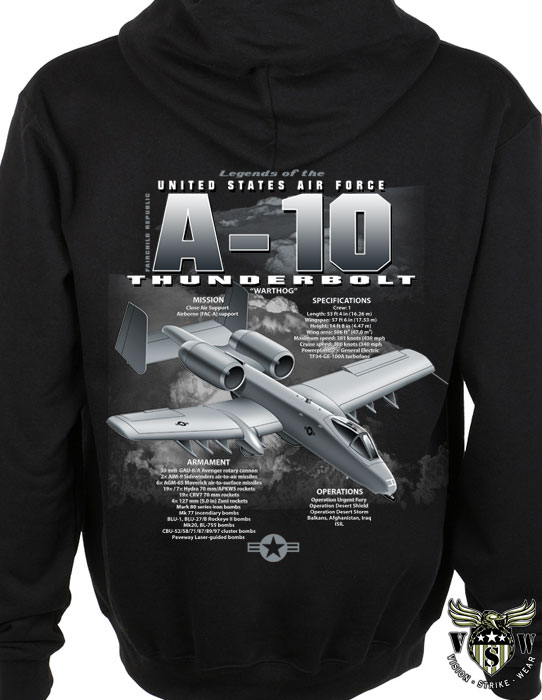 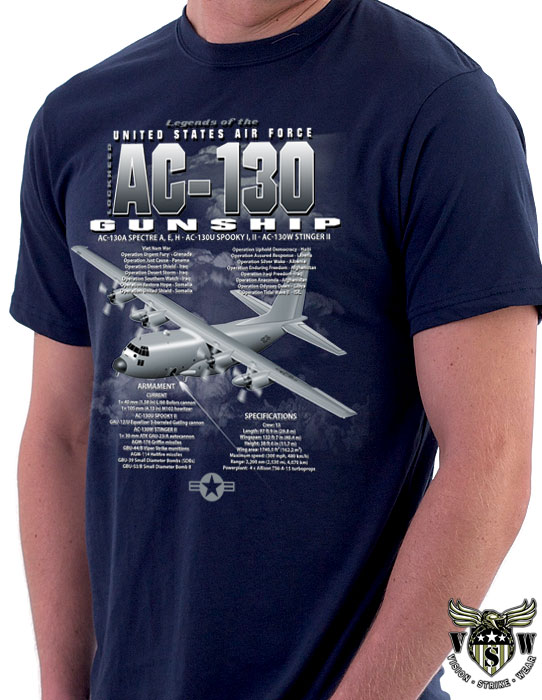 From Joint Base McChord to Fort Drum, Fort Bragg to Fort Benning, Fort Sill to Fort Wainright it has been the pleasure of Vision-Strike-Wear.Com to design custom military Army shirts for the United States Army. Infantry, Quartermasters, Special Forces, Kiowa and Blackhawk Squadrons, Artillery units, designs for US Army on deployment from Iraq to Afghanistan and a variety of specialized interests.

Big Army is large and expansive and often has a desire for the finest in custom military design and printing. Vision-Strike-Wear.Com offers the finest designs for domestic or deployed units. Designs and printing can be delivered all over the world to our US Army personnel so whether crossing the wire or going outside the gate, VSW can make it happen.

HHT 2/11 Armored Cavalry Regiment live in the belly of beasts!

B Co 1-52nd Sugar Bears and this incredible Chinooks asked for a color design based on their military patches.

4-3 Killer Troop asked for a mdern version of their skull with bandana design and crossed cavalry sabres for their recent deployment.

A Co 563rd Aviation Support design for their recent deplyment to Bagram, Afghanistan.

Created for the Hellraisers of the 2nd Cavalry Regiment!

1-10th Havoc Troops. A skull and a stetson. Perfect for scaring the daylights out of Tangos.

A custom design made for the US Army 767th EOD.

Help Heal Our Vets in collaboration with Vision-Strike-Wear.Com is announcing its efforts to raise awareness of issues and support that help our US military veterans. There are many very important organaizations and military non-profits whose goal it is to support our veterans and put the much needed funds into their hands where it can do our veteran’s the most good. This is what Helphealourvets.Org does.
Your purchase of the Helphealourvets.Org hoodie allows all proceeds to be donated to military charities and organizations who do the job right and take care of the veterans. No more red tape or layers of bureacratic salaries that produce little nothing for our veterans. These dollars go to the veterans. Your purchase of this hoodie makes this possible.
This Veteran’s Day will mark the beginning of the fundraising campaign created by Healp Heal Our Vets and between this Veteran’s Day and next years Veteran’s Day 2015 where we will announce the amount that will be donated to the organizations that do the most good within the veteran community. We are excited to partipcate and be part of a fundraising campaign whose sole purpose is to help heal our veterans.

Help us reach over 100 custom US Army designs this year! Please use coupon code unit20 and receive 20% off your next US Army design and order.

In 2012 the United States Army and its unit deployed across the globe were joined withthe Australian Royal Regiment and between the US Army and the RAR Vision-Strike-Wear.Com was kept extremely busy with highly detailed custom US Army designs for shirts, hoodies and apparel. The bar for detailed military graphics had clearly been set and now mofre than ever it was apparent that units now had a new option when it came to highly effective unit shirts that could be worn with pride.

The days of cut and paste and small print shops getting away with cutting images off the internet were over. Now was the development of real graphics and the few companies who really specialized in custom US Army designs found their way to the frontline. Companies like Vision-Strike-Wear.Com.

Below are just some of the the Very Best Army Custom Designs From 2012!

SASC Knights Of The Black Rifle

2011 was a very busy year for the United States Army and during their many deployments to locations all over the world came the call for deployment shirts. Infantry units, civil affairs, transportation units and the many other units located all over the world. Vision-Strike-Wear.Com was in its third year as a leading custom design company specializing in military graphics for shirts, hoodies and other printed apparel items.

The yeear 2011 brought many interesting military design concepts and as the world found American in Afghanistan and Iraq the artists of Vision-Strike-Wear.Com were hellbent on making the finest custom Army shirts for them in the industry. Below are examples of the custom military designs that were created during 2011.

Sometimes a design never gets a chance to go to final but some make great concepts. This one didn;t make it off the artist’s desk but it would have been a great design of completed.