Was Popeye A Coastie Or A Navy Sailor? Spinach was the answer

He has been a one man Spinach attack machine fighting the Japanese, their submarines and Nazi Germany in a two front war and he came out victorious.

Popeye During The War Years

In times of War the US Coast Guard has become integrated with the US Navy and during the many battles and engagement of the Pacific War in WW2 Popeye was always present and helped to defend America in her time of need.

He has been a long standing tradition not just on popular cartoons found on television or in the movies but he has been a staple of leadership, courage, hope and above all things integrity. Popeye has been  civilian, worn the uniform of a sailor, a Navy sailor, been part of the US Coast Guard and surprisingly enough even enlisted for service with the US Army.

We did not know that either until just recently.

When it comes down to it though we ask the question: Popeye A Coastie Or A Navy Sailor?

Or a Navy Sailor?

1. How old is Popeye? Well if you can count on more than two hands and I know I can’t he was born in January of 1929. Popeye when he was first created was 1 of several creations in a comic strip created by artist by Elzie Segar called Thimble Theater, which had preceeded Popeye by 10 years before he showed up.

At the time Popeye’s age was 34-year-old (born in a typhoon in Santa Monica, California),  a one-eyed, somewhat deformed-looking sailor with a severe speech issue. The Popeye character was so incredibly popular, the comic strip was re-named Thimble Theater Starring Popeye and then later just called Popeye, which became the same title it has carried to the present day.

2. The Popeye cartoon has given all of us a few words and terms contributing to the English language:

3. Even though Popeye was an extremely popular comic strip character in his own right, it is as a movie cartoon character and star that most people recognize and remember him from.  Popeye’s very first extravaganza on film was seen in a 1933 Betty Boop Paramount films cartoon called Popeye the Sailor.  And later in 1937 the city of Crystal Texas constructed an official “Popeye” statue, making this the first time in world history that a city had built a statue in honor of a cartoon character. 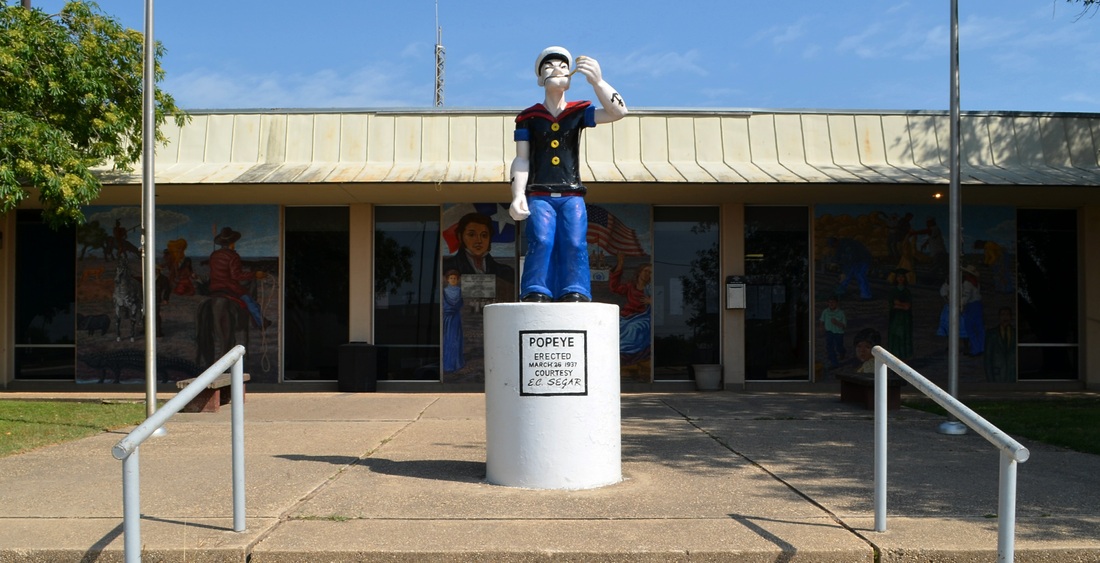 4. The voice of Popeye between the years 1933-1935 was then of “Red Pepper Sam” (a.k.a. William Costello). His erratic and often confusing behavior presented an issue for Paramount and he was later fired. Replaced by Jack Mercer, it was found that his performance gave Popeye’s greatest of all performances.  (All three of the series’ main characters, Popeye, Bluto, and Olive Oyl were voiced by several different actors and actresses during the series’ run).

5. Did you know that Popeye originally derived his great strength from rubbing the head of the Whiffle Hen. Soon after this was soon chnaged to what we have all come to love and respect is Popeye’s connection to spinach which occcurred by 1932.  Not only was strength the end result of his spinach eating but secondary and tertiary traits involved his abilities to include virtuoso dancing or playing piano.  It was during the Depression that spinach became so popular that its sales leaped by 33%, and was briefly slotted in as the 3rd most popular kids food item after ice cream and turkey. I find it hard to believe but its true! Even today “Popeye” spinach is still the 2nd largest-selling brand of spinach sold in America.

6. In one Popeye cartoon, he tells his nephews that he descends from Hercules and his ancestor first gained his strength from from inhaling garlic.

7. It was during World War 2, the Popeye cartoons and features reached incredible popularity and became part of the mindset to boost morale and were frequesntly shown to the troops and their popularity intensified due to the racially and none to politically correct racial slurring of the Japanese with who we were at war with. This type of message whereby the enemy was ridiculed was seen in war propaganda posters and partof the war effort throughout WW2. For example, in the Popeye cartoons, the Japanese are termed “jap-pansies” and illustrated with vicious, buck-toothed faces and sporting thick glasses.  Did you know that a  “banned” racist World War II Popeye cartoon named “Seein’ Red, White ‘n Blue” has the unique historical fact of being the one and only Popeye where Bluto and Popeye (then full on enemies) join forces and swallow a shared can of spinach so they could beat up on Japanese soldiers?

8. During the war years, (World War 2) Popeye also made a distinct wardrobe change.  No longer wearing the customary black rolled-up shirt and white skipper’s hat Popeye donned the naval uniform of the US Navy. Popeye’s uniform consisted of white uniform with dixie cup included. Popeye’s new uniform would remain with Popeye through the run of the cartoon series, even after the end of the war and well after. A good case for Popeye inthe US Navy? 9. We have world wars but did you know that wars exist between film studios?  Many years ago in the wonderful cartoon film “Who Framed Roger Rabbit?”, there was a climactic scene at the end of the feature filmtat includes just about every famous and infamous, beloved cartoon character in the history of animation… except Popeye.  This strange and curious omission occurred, not because they forgot about our sea going hero Popeye, but simply that Disney could not get legal permission from Paramount studios to use the sailor’s likeness in the film. Sad we could see him with all of his friends.

10. In the comic, Popeye’s famous one-eye facial feature and personal characteristic is associated with “The mos’ ‘arful battle”.  It is never really confirmed and has always remained unclear whether Popeye actually only has one eye or maybe is just squinting (although in at least one cartoon, Bluto calls him a “one-eyed runt”).

11. When doesn’t a sailor eventually have a problem with his girlfriend? In the original Thimble Theater comics, Olive Oyl’s original boyfriend was “Ham Gravy”.

Ham was soon removed from the comic series because of Popeye’s amazing popularity and celebrity.  Despite the anorexic appearance of Olive Oyl eventually becoming Popeye’s girlfriend, in the Popeye comics and cartoons and even movies, Olive insults and berates Popeye on a frequent basis; is unfaithful routinely (but he didnlt get a dear John letter amazingly enough); and in general treats him like a pile of dirt.

In several Popeye cartoons, Olive actually hits, strikes, and/or beats the heck out of the luckless sailor.  She never gets Captains mast but you know it would have happened in today’s world. Despite this and her lack of any sex appeal, and that is putting it mildly, Popeye’s undying love for Olive Oyl persists throughout the sailor’s career. Just one of his many points of integrity and core values he exhibits regularly.

12. We have gone through 11 different Popeye little known facts without touching on the subject of Bluto? Well we saved the big guy for last. Popeye’s arch-nemesis, Brutus, (yes he had several names!) was originally and not so affectionately named Bluto, but this was changed for legal reasons. Can you imagine that? How so many legal issues has come up for such a hard working, seagoing sailor with a huge heart, love and affection for his lady friend, the fighting ability of 10 armored tank divisions and still he can’t seem to swim away from sharks and lawyers? It never seems fair.

Does it surprise anyone that in a majority of Popeye episodes, Bluto is a clear-cut enemy, arch-rival for Olive’s affection.  However, and much to the contrary, and on many occasions, Bluto and Popeye start the cartoon out as “friends” and “pals”.

Now comes the fun part. Bluto, however, almost always inevitably double-crosses his “pal” on almost every occasion, causing one to wonder why Popeye doesn’t drop the guy out of his life and “list of buddies” like a bad habit or a cheap suit. Maybe Popeye just thinks eventually Bluto, sorry Brutus, will come around. He never does.

So if we bring back our question as to whether if or did Popeye join the USCG or the US Navy and according to the following we feel the answer is both!

It should also be noted that Popeye is enlisted in the U.S. Coast Guard and did not enlist in the Navy until 1941 in the Fleischer short The Mighty Navy. (Source: Wikipedia)

Then of course there is the memorabilia of Popeye which cannot be escaped from. Bringing time honored traditions back and preserving the look and feel of Popeye is appreciated by all. In this case the newest Popeye commemorative coin is displayed below.

Licensed and approved by King Features, the license holder for Popeye, one can experience Popeye in true metallic coin form!