Battle Rattling For 240 Years With Freedom And Choice

From the founding days of America our decsions have been all about one central concept: choice. The choice to leave the bonds of England, the decision to fight both Germany and Japan on two fronts, the choice to never quit, never surrender and never leave a brother or sister on the battlefield. Every merit and decision we have as a people have made in this country has derived from the concept of choice.

Freedom As A Choice!

Let’s face it, the United States who shares much if its history with England from a common language, similar religions and backgrounds did what others had not leading up to its departure from the British Commonwealth and that was to take back the freedom to choose self rule over colonial England rule and tyrrany of an English monarchy. It had to do with choice and choice means the freedom to do so. To think it up, take action and carry that out to its inevitable outcome. In our case the founding of the United States.

Let’s face it. A whole lot of British soldiers never went home because the soldiers, guardsmen, minutemen, US Marines and members of the Continental Army decided let’s not stand in a line and fire our muskets at British Redcoats. Instead they made the choice to fire from trees, brush, brambles, in a non-conventional military manner. The British paid the price. Again this was the choice made by the tacticians of our US military down to the individual soldier who would not play by the rules set by others. Instead it was about choosing to fight on one’s own terms.

I for one feel lucky everyday I wake up in a country whose energy runs on the freedom found in the blood of each and every America. Our choices consume who we are and where we go, what we do and because America is the Land Of The Free and without much intrusion does have an environment that allows anyone to rise to achieve their dreams. Again its all about choice. Will I take a left when I should go right? Will I cross the line in the sand or make a comment where others fear to tread. Nothing is perfect but compared to other countries it isn’t bad either. Nothing is as perfect as we want it to be and guess what? You have the choice to make a difference and chnage it if you want to.

From the day your recruiter asked you if you would make the choice to put on the uniform of the United States military and pedge and oath to the Constitution of The United States and its citizens you made a choice. You raised your right hand and you made a choice. Off you went to some bootcamp where professionally trained Drill Instructors took a slimy piece of whale excrement and trained it up to become a fine example of a US soldier, airman, US Marine, US Coast Guardsmen or US sailor. All because of a choice you made.

Battle Rattle! It is about choices.

Why Battle Rattle. Think of all the missions, ops, situations and roles our military takes when combating enemies all over the world? Each situation requires a different set of tools to complete the job and with that choice are made as to what type of gear is needed for the successful completion of those mission. What you take with you is one of the most important decisions you can make in the field.

Years ago Vision-Strike-Wear.Com adopted a similar philosophy when it came to chnaging the terrain called custom shirt design and printing. Fostered on the central concept of providing the tools for their customers they made the conscience decision to not adopt what other military shirt companies had done before them: make shirt they wanted to sell to you. Instead the decision was reached that it was more important that VSW customers have the freedom to choose what they wanted on their shirt and not visa versa. Battle Rattle military shirts was then created and since then a variety of Battle Rattle designs were made with features and options to build a custom shirt from the ground up by its customers.

The bottom line is that it creates a military design that customers can customitize on their own and see the changes on the screen as they select from a variety of options.

What are Battle Rattle Features and Options?

It’s a big list and with at least several designs the number of different options is quite literally in the millions. All branches of the military are covered and one of the most important things also to note is that American cotton shirts are available. The active duty, retirees, prior service, family and friends wanted a place where they could have American made shirts.  We responded.

The Battle Rattle designs from Vision-Strike cover the entire military and every branch. Army, Navy, Air Force, Marine Corps and Coast Guard. Within each military branch there are several highly detailed and razor shapr military designs many with a broad level of interest from MOS designs, Navy rate designs such as one for Hospital Corpamen to Coast Guard military graphics that feature Coast Guard Cutters or Jayhawks. 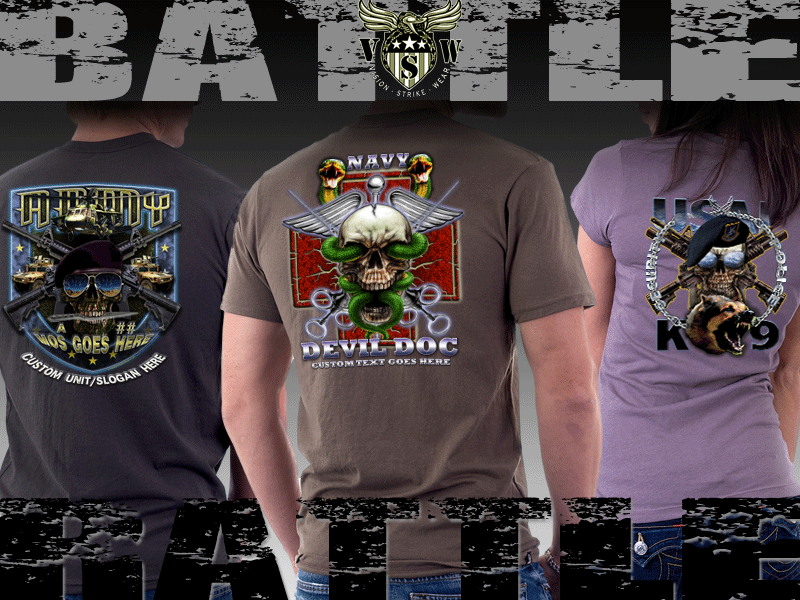 Have your Army Rank updated on this US Army Rank Battle Rattle design.

Build a military design for your shirt or hoodie with this Army MOS Battle Rattle design!

Cast fear into the enemy with this skull and crossbones with boonie cover Battle Rattle design.

The desert warrior Battle Design created for our active duty and veterans.

One for the IED experts and Task Force Troy

The Navy Rate and Rank design. Have your chevrons in red or gold displayed on this catchy air, sea and submarine backdrop.

The Sea Is Ours. This US Navy design features the kind of updates we received hundreds of requests for from cover to aviation element updates.

The Sea Is Ours

The US Navy Diver Battle Rattle

Your Marine MOS your way!

240 Years of Freedom and Choice!

When you think about the age of our country and how long we have operated with a heightened sensitivity towards choice once must realize that choice and freedom go hand in hand. You cannot have one without the other.

How old is America? Here is an interesting little trivia. Well when you consider the lifespan thus far of the United States can stretch between the lives of only 4 US President’s not as long as you would think. We have been alive and kicking and our military men and women on the line, the fence, outside the wire, in the trenches, on the sea and in the air have been defending our way of life since our birth in 1776. Our military many people who might already know are actually as old as 1775 to include the US Marines and US Navy who share the same birth year and are one year older than the United States.

Just in case you didn’t believe you can go back to the founding of America based on the lives of just 4 US Presidents.