The Great Seal Of The United States 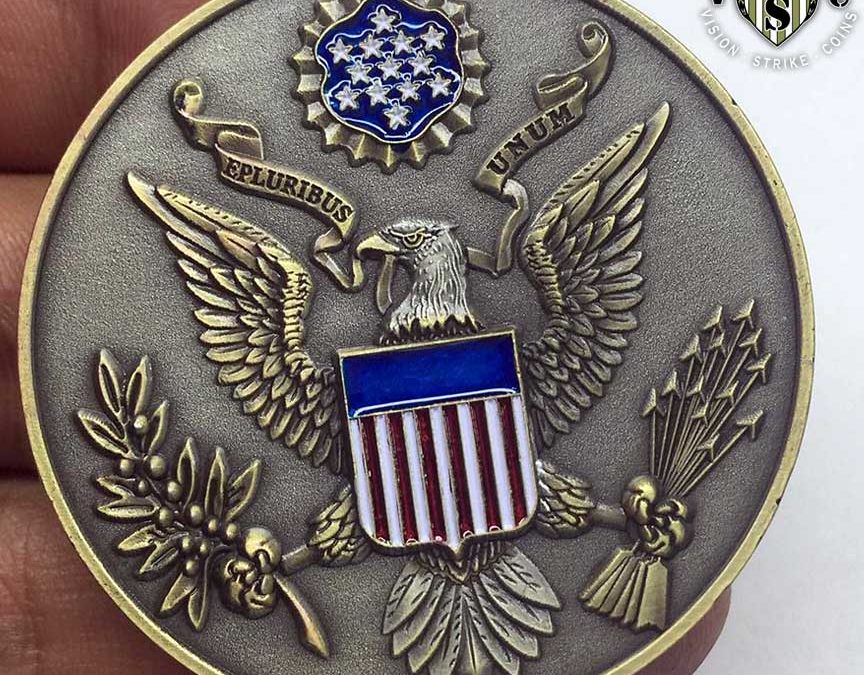 What is the The Great Seal Of The United States and what does it mean and why did these particular elements form the icon of the United States? These questions and the time, resources are insight into how such an important part of United States history was created at the founding of our country and how ideas and icons were developed to tell a message of the USA.

What Are The Two Sides To the Great Seal Of The United States? 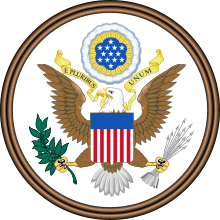 The obverse or reverse side of the of the Great Seal is used as the national Coat Of Arms of the United States. It is officially used on documents such as United States passports, military insignia, embassy placards, and various flags. As a coat of arms, the design has official colors; the physical Great Seal itself, as affixed to paper, is monochrome. 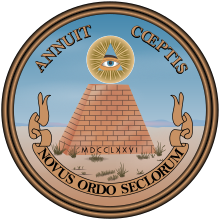 Since 1935, both sides of the Great Seal have appeared on the reverse of the one-dollar bill. The Seal of the President of the United States (POTUS) is directly based on the Great Seal, and its elements are used in numerous government agency and state seals. (Source – Wikipedia)

What Is The Symbolism Behind The Great Seal Of The United States?

The design on the obverse (or front) of the seal is the coat of arms of the United States. The American shield, often thought of whenever the American Bald Eagle is seen, frequently drawn incorrectly, has two primary differences from the USA flag. First, it has no stars on the blue chief (though other arms based on often do: the chief of the arms of the United States Senate often shows 13 or even 50, and the shield of the 9/11 Commission has, sometimes, 50 mullets on the chief). Second, unlike the American flag, the outermost stripes are white, not red; so as not to violate the heraldic rule of tincture. Often overlooked this still stands as a significant different between the two

The supporter of the shield is a bald eagle with its wings outstretched (or “displayed”, in heraldic terms). From the eagle’s perspective, it holds a bundle of 13 arrows in its left talon (referring to the 13 original American states), and an olive branch in its right talon, together symbolizing that the United States has “a strong desire for peace, but will always be ready for war.”. Although not specified by law, the olive branch is usually depicted with 13 leaves and 13 olives, again representing the 13 original states. The eagle has its head turned towards the olive branch, on its right side, said to symbolize a preference for peace. In the Eagle’s beak, the eagle clutches a scroll with the motto E pluribus unum(“Out of Many, One”). This Latin term is the motto for the United States and clearly signifies the unification of the United States and its desire for independence from Britain.

Over the Eagle’s head there appears a “glory” with 13 mullets (stars) on a blue field. In the current (and several previous) dies of the great seal, the 13 stars above the eagle are arranged in rows of 1-4-3-4-1, forming a six-pointed star.

The 1782 resolution of Congress adopting the arms, still in force, legally blazoned the shield as “Paleways of 13 pieces, argent and gules; a chief, azure.” As the designers recognized, this is a technically incorrect blazon under traditional English heraldic rules, since in English practice a vertically striped shield would be described as “paly”, not “paleways”, and it would not have had an odd number of stripes. A more technically proper blazon would have been argent, six pallets gules… (six red stripes on a white field), but the phrase used was chosen to preserve the reference to the 13 original states.

The Coat Of Arms Of the United States and What Does It Mean? It’s a Pyramid!

The 1782 Congress resolution adopting the seal blazons the image on the reverse as “A pyramid unfinished. In the zenith an eye in a triangle, the all seeing eye, surrounded by a glory, proper.” The pyramid is conventionally shown as consisting of 13 layers (or stacks as it is built from its base to its pinnacle) to refer to the 13 original states. The adopting resolution provides that it is inscribed on its base with the date MDCCLXXVI (1776, the year of the United States Declaration of Independence) in Roman numerals. Where the top of the pyramid should be, the Eye of Providence watches over it. Two mottos appear: Annuit cœptis signifies that Providence has “approved of (our) undertakings.” Novus ordo seclorum, freely taken from Virgil, is Latin for “a new order of the ages.” The reverse has never been cut (as a seal) but appears, for example, on the back of the one-dollar bill where it is most commonly seen.

The primary official explanation of the symbolism of the great seal was given by Charles Thomson upon presenting the final design for adoption by Congress. He wrote:

The Escutcheon is composed of the chief & pale, the two most honorable ordinaries. The Pieces, paly, represent the several states all joined in one solid compact entire, supporting a Chief, which unites the whole & represents Congress. The Motto alludes to this union. The pales in the arms are kept closely united by the chief and the Chief depends upon that union & the strength resulting from it for its support, to denote the Confederacy of the United States of America & the preservation of their union through Congress.

The colours of the pales are those used in the flag of the United States of America; White signifies purity and innocence, Red, hardiness & valor, and Blue, the colour of the Chief signifies vigilance, perseverance & justice. The Olive branch and arrows denote the power of peace & war which is exclusively vested in Congress. The Constellation denotes a new State taking its place and rank among other sovereign powers. The Escutcheon is born on the breast of an American Eagle without any other supporters to denote that the United States of America ought to rely on their own Virtue.

Reverse. The pyramid signifies Strength and Duration: The Eye over it & the Motto allude to the many signal interpositions of providence in favour of the American cause. The date underneath is that of the Declaration of Independence and the words under it signify the beginning of the new American Æra, which commences from that date. (Source – Charles Thomson)

Thirteen is the central number that is found throughout the Great Seal Of the United States as well as the USA Coast Of Arms. The official description of the seal states that there should be thirteen stars in the “glory” above the eagle’s head, thirteen stripes on the shield, and thirteen arrows in the eagle’s talon. The initial description of the reverse specified thirteen levels to the pyramid, and though the number was left out of the final version, all depictions typically still show thirteen levels. Also by custom, since 1885 there are thirteen leaves and thirteen olives on the olive branch. The fact that there are thirteen letters in two of the mottos (“e pluribus unum” and “annuit cœptis”) seems to be coincidental (and depends on whether one considers the ligature “œ” to be one letter or two).

These are the only preliminary drawings
of the final design for the Great Seal: 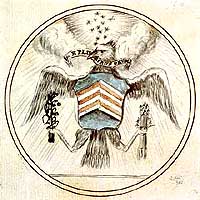 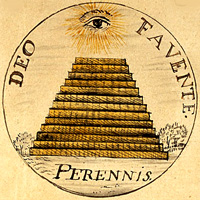 After these were drawn, a few revisions were made:
• The Eagle’s shield was given vertical red & white stripes.
• New Latin mottoes were chosen for the pyramid side.
• A triangle was placed around the eye of providence.
• MDCCLXXVI (1776) was placed beneath the pyramid.

But no new drawings were made.
No artwork was submitted to nor approved by Congress.

The official Great Seal adopted on June 20, 1782
is in the form of a written description only. 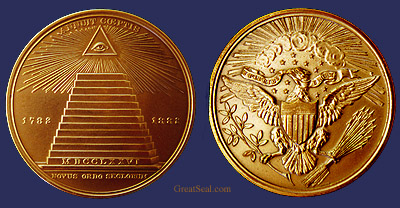 Some of the best examples of the eagle side are on the Indian Peace Medals given by President Washington in the 1790s. The Diplomatic Medal of 1792 is also outstanding.

Illustrations of a seal are called “realizations.”
Here are the U.S. Department of State’s current realizations:
(Source – Great Seal Overview)

The rich symbology, its connection with the 13 original American States, its desire for independence constructed at a time when the country was new, has made the Great Seal Of the United States one of the most important images of the United States. The Great Seal of the United States, its reverse side, its Coat Of Arms, is incredible insight into what has made America great, solid, unified and a country who preserves its freedoms and helps other countries to maintain theirs. These icons of American history continues to be preserved and reproduced whether on challenge coins like the ones displayed below or in some other form. 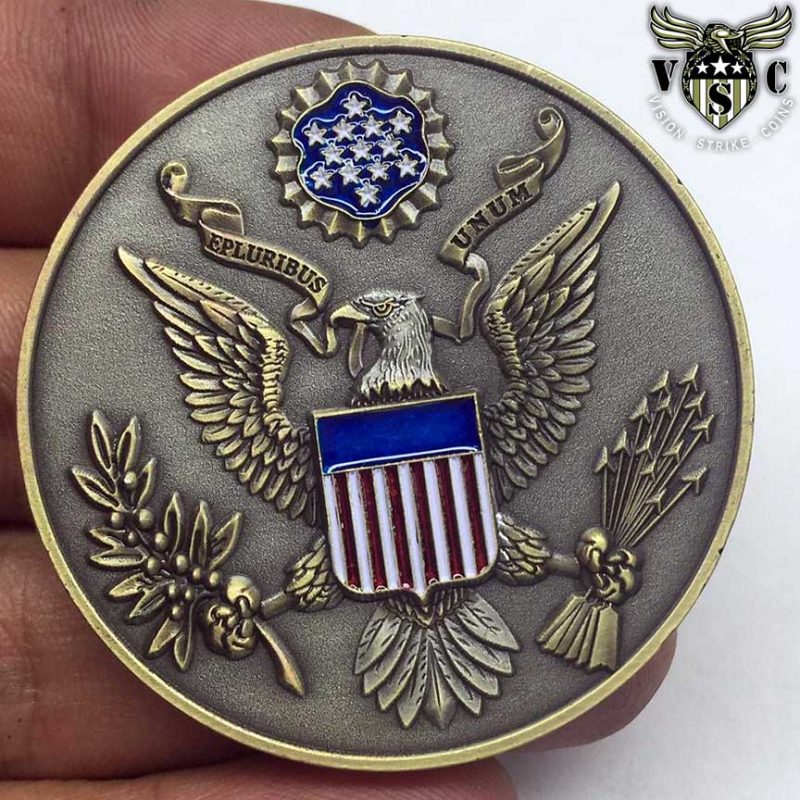 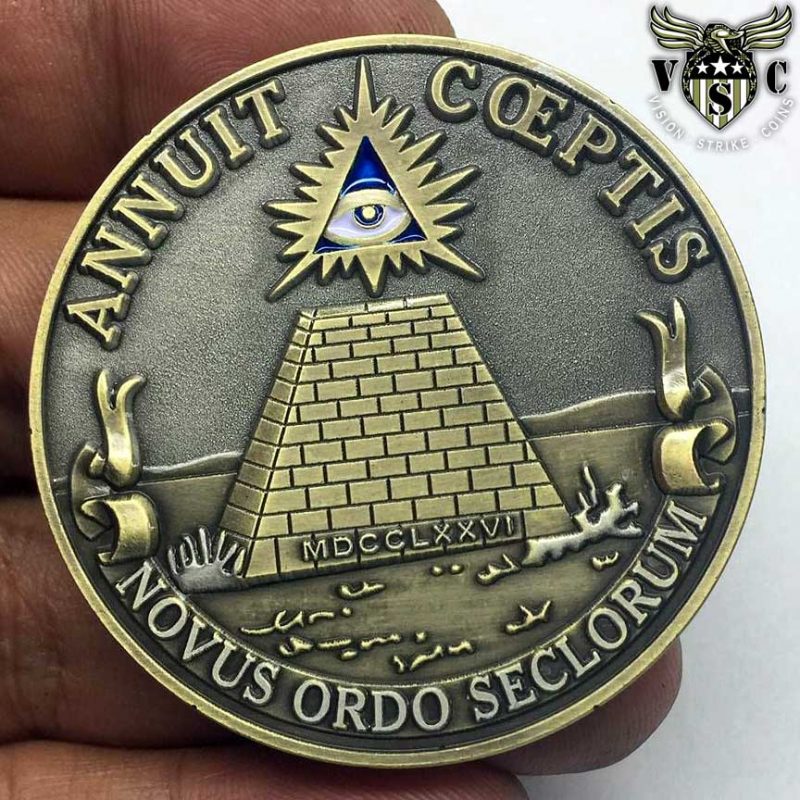