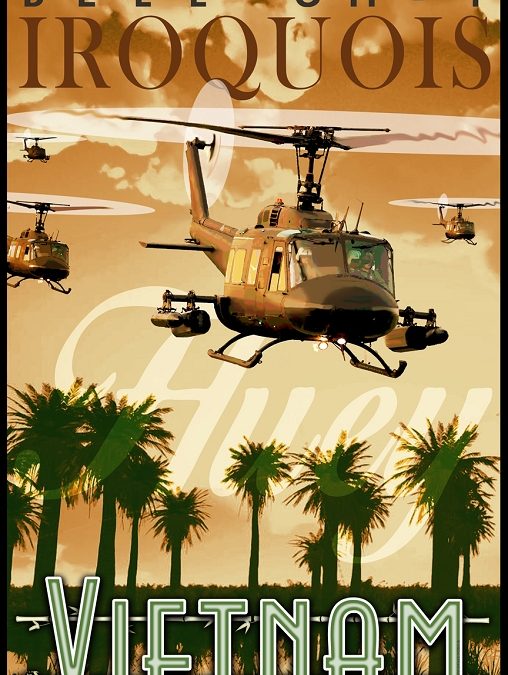 No other means of aircraft has been so widely displayed in movies, books, visual accounting, story telling as the UH-1H Iroquois over the skies of Vietnam. The Huey, Loach, helo and many other terms and slangs have been given to this bird over the years. So let’s take a look at what she is and what she has done.

WHAT IS THE HUEY?

The Bell UH-1 Iroquois (nicknamed “Huey“) is a utility military helicopter powered by a single turboshaft engine, with two-blade main and tail rotors. The first member of the prolific Huey family, it was developed by Bell Helicopter to meet a United States Army‘s 1952 requirement for a medical evacuation and utility helicopter, and first flew in 1956. The UH-1 was the first turbine-powered helicopter to enter production in 1960 for the United States military, and more than 16,000 have been built since.[1]

The Iroquois was originally designated HU-1, hence the Huey nickname, which has remained in common use, despite the official redesignation to UH-1 in 1962.[2] The UH-1 first saw service in combat operations during the Vietnam War, with around 7,000 helicopters deployed. (Source – Wikipedia)

THE HUEY IN MOVIES.

Easily argued the scene with the 1st Cav screaming over the skies of Vietnam inbound towards the hooches off the Vietnam coastline strikes many memories as seen in the movie Apocalypse Now. Colonel Kilgore and his quote “I love the smell of Napalm in the morning. It smells like victory!” is synonymous with the Huey and its versatility as a weapons platform and a troops transport.

Every Helicopter Is a Huey

Hollywood invariably produces at least one military movie per year but here are a few things that make the use of the UH-1 a bit funny when you stop to think about it.

It’s true Holly has a fetish when it comes to a Huey and for a variety of reasons. Every time the Hollywood heroes in an action or military movie or TV show have to go somewhere and someway by helicopter, there are big chances they will be doing it in a Huey. This is justified in Vietnam War movies cause well they were there and they were actually used: the UH-1D Iroquois is an icon of United States involvement in Vietnam, with over 7,000 birds seeing service (and many, many more of other military and civilian models since—Bell is still making Hueys today believe it or not). As a dedicated troop transport helicopter, it’s a natural choice for the Platoon. The Huey looks like the perfect helicopter that conveys a tough, militaristic feel and suggest a military movie in the way that a less easily-recognizable helicopter might not. Maybe its because so many of them have been used they are simply the go to helicopter when it comes to movies. In a gunship, Huey situation, one can expect two heavily-armed attack Hueys flown by nameless pilots in formation (ton of movies that have this) with a Huey carrying a hero. Though the United States military started replacing Hueys with Black Hawks as the general-purpose transport helicopter as long ago as 1979, they still keep a lot of them flying for various odd jobs and things. The same is true of the other branches, except the Marine Corps, who not only still use them in a front-line role but are also currently taking delivery of the new and highly-advanced UH-1Y model. It’s commonly said in the US Military that when the last Blackhawk is deleted from the inventory, it will be slingloaded to the Boneyard by a Huey. In the movies they still show up everywhere even now from movie to movie – even places they have no right to be, in countries that never flew them as funny as that may be. As a general rule:

It flies, turns, banks and survives against all odds when taking on a Russian MiG

Col Hal Moore takes his Troopers into the jungle of Vietnam and with the use of the Huey survives against impossible odds. The Huey made the difference.

“We will ride into battle, and this will be our horse.”