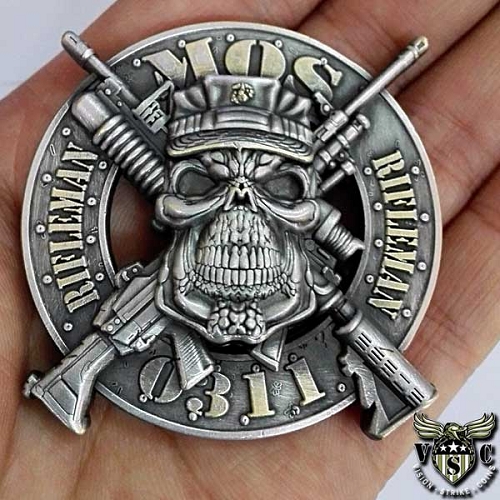 USMC MOS Coins Bark At The Competition because of their bad ass tendencies and nature! The USMC is the best and they deserve the best and whether its an 0311 Grunt, a USMC Drill Instructor, Machine Gunner, Scout Sniper, United States Marine Recruiter, Combat Engineer, Artilleryman, Mortarman Infantry Assaultman and Small Arms Repairman the jobs of the USMC are built on teamwork, pride and the the overriding desire to be the best. They have the warrior spirit embedded in each US Marine and their drive and demanding of the best in others and especially of themselves is why they succeed in all things.

Keeping weapons up to date and fully repaired is a key job in any branch of the military, and in the Marines, a big part of this responsibility falls to the small arms repairer/technician. It’s an enlisted job with some specific requirements to be eligible.

The general military definition of small arms, which are somewhat different than light weapons, refers to those weapons that can be used by a single person.

They include handguns, light automatic weapons (which include some machine guns), portable rocket launchers, rifle- and shoulder-fired grenade launchers and other shoulder-fired weapons. For the most part, small arms are considered portable, and can be fired without a tripod or special mount. They may be used in civil disturbances as well as combat, and can be stolen more easily than light or heavy arms.

At the Corporal through Gunnery Sergeant level the small arms repairer/technician performs, trains, and supervises inspection, maintenance, and repair of all small arms, to include vehicular mounted small arms. (Source – The Balance.Com)